iStock/Thinkstock(KANSAS CITY, Mo.) — A man claims he was under a sort of exorcism when he confessed to killing a fellow member of a religious group in Kansas City, Missouri, whose death was originally ruled a suicide.

The body of Bethany Deaton was found Oct. 30, 2012, in the back seat of her minivan with the doors locked and a note inside.

“My name is Bethany Deaton. I chose this evil thing,” the note read, according to court documents. “I did it because I wouldn’t be a real person and what is the point of living if it is too late for that? I wish I had chosen differently a long time ago. I knew it all and refused to listen. Maybe Jesus will still save me.”

Deaton, 27, was a member of a religious group called the International House of Prayer, which was led by her husband, Tyler Deaton. A few weeks after her death, Micah Moore, another member of the group, confessed to her slaying.

Tyler Deaton had a cult-like following within the group and controlled virtually every aspect of some members’ lives, according to court documents.

When Moore confessed, he told police Deaton ordered him to kill his wife to stop her from telling anyone about sexual assaults against her in the house, according to police records. The three lived in a communal house with other male members of the group.

“This is a horrible, horrible crime,” Jackson County Prosecutor Jean Peters Baker said. “A young woman lost her life. She lost her life in a very violent way and today, we do know what happened to her.”

Now Moore claims he only confessed to killing Deaton because he was under the influence of what some have called an exorcism. Moore, who is scheduled for trial next month, has pleaded not guilty.

“They were the statements of a distraught and confused young man,” his attorney, Melanie Morgan, said.

The medical examiner has also changed the manner of Deaton’s death to undetermined.

“We are aware of no evidence that a crime has occurred,” Morgan said.

The International House of Prayer denied any affiliation with Deaton’s group in a statement to ABC News.

Win an Overnight Stay at the brand new TownePlace Suites by Marriott in Midtown Nashville this weekend! 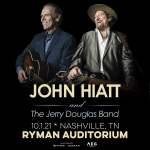 Win 2 tickets to John Hiatt & The Jerry Douglas Band on Friday, October 1st at the Ryman!

Win a 4-pack of tickets to visit the Country Music Hall of Fame and Museum!