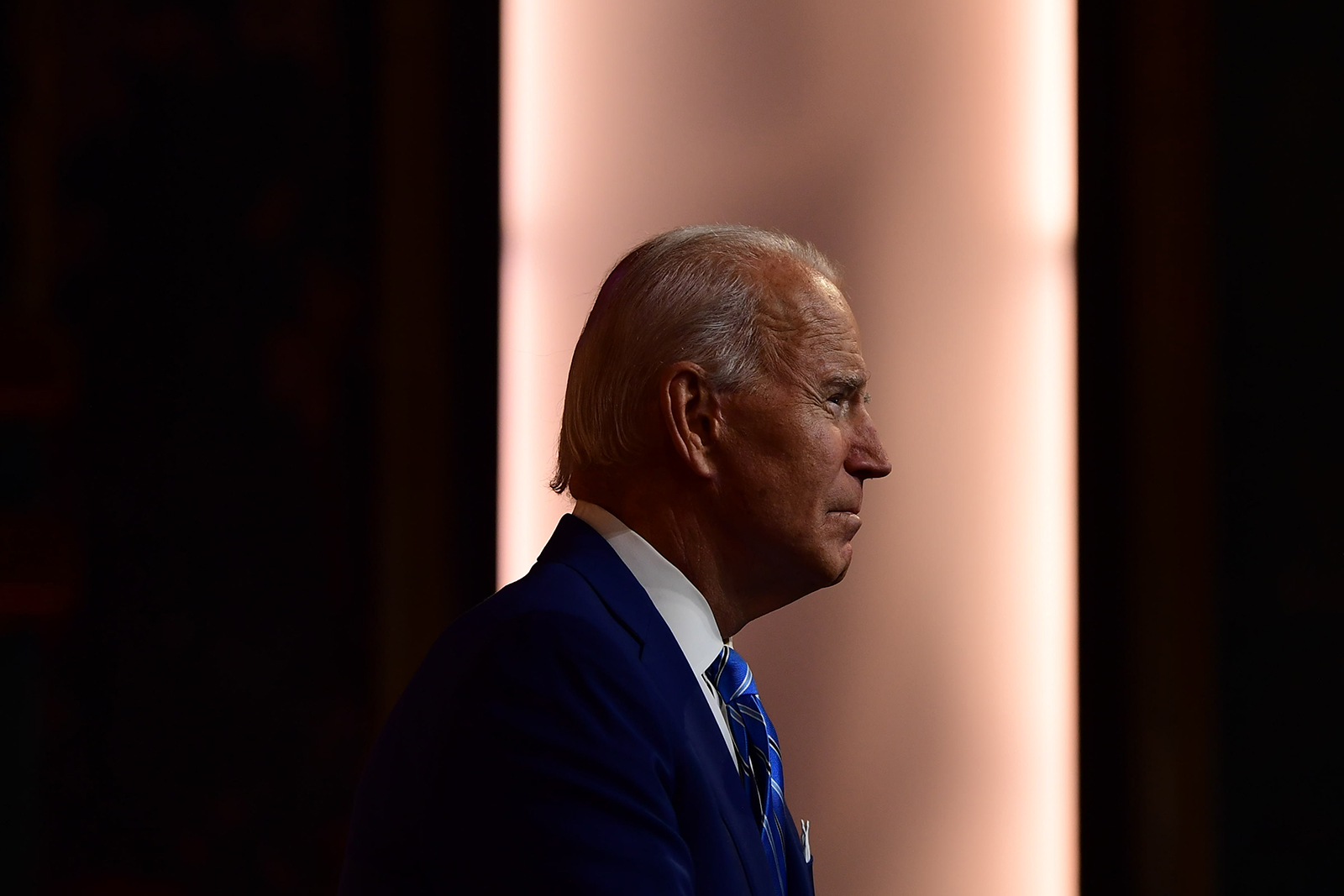 Joe Biden is facing dueling headwinds as he looks to fill out his Cabinet: Senate Republicans want the President-elect to consult with them and choose nominees who could win their support, while liberal Democrats are pushing him to name progressives who could shape the policies of his government.

And Republicans, if they keep control of the chamber, are not committing to scheduling votes on nominees they consider out of the mainstream, nor are they vowing to quickly let Biden’s picks get confirmed in the first days of his administration despite the private and public lobbying by top Democrats.

What could delay deliberations further: President Donald Trump’s refusal to concede, coupled with Republicans’ reluctance to say Biden is the winner, meaning few them are ready to engage over the President-elect’s choices or hold courtesy meetings as Democrats are beginning to do.

As Biden moves quickly to fill key slots — ranging from health to education to defense — lawmakers are warning who they would accept and who they wouldn’t.

“I think he has made some very good choices,” Sen. Elizabeth Warren, a Massachusetts Democrat, told CNN on Wednesday. “I’d like to see some strong progressives on the team.”

Others made clear that Biden should make bolder picks if their party wins the two Georgia Senate races in January and takes control of the chamber.

“If we win the Senate, then I do think the administration should be open to more aggressive appointments or rather appointments who would support a more aggressive agenda to help working families,” Rep. Alexandria Ocasio-Cortez said, warning Biden not to name nominees with “an austerity mindset.”

“I think it’s one of the most simply damaging things that could happen to the Democratic Party that would absolutely imperil us in 2022 is if we had a bunch of austerity people, or an austerity strategy and austerity mindset,” the New York Democrat told CNN.

Biden has a complicated balancing act by seeking to appease the left while dealing with Republicans in the Senate who are likely to resist many of his nominees — like Neera Tanden, the head of the liberal think tank Center for American Progress, who was chosen by Biden to serve as the next White House budget director. Her nomination has sparked the ire of Republicans, many of whom she has attacked on Twitter over the years, warning Biden not to name future nominees to positions with a similar ideological bent.

South Dakota Sen. John Thune, the Senate majority whip, said that pushback from the GOP over the Tanden pick should be “a warning signal” to Biden — especially if Republicans win one of the two Georgia runoff races that would ensure they hold the majority in the new Congress.

“If things go our way in Georgia and we’re in the majority, then I would expect a fairly high level of consultation,” Thune said. When asked if they would commit to scheduling votes on all of Biden’s nominees, Thune ultimately said: “We will take them case by case, if and when they come.”

Some Republicans say that Biden should be consulting with GOP leaders now, including Majority Leader Mitch McConnell — even though they haven’t even acknowledged that Biden won the election.

“I would think the incoming administration would be wise to reach out to the leader,” said Sen. John Cornyn, a Republican of Texas, who like McConnell hasn’t referred to Biden as “President-elect” yet. “It’s not his job, it’s their job to make the case and to coordinate the confirmation process.” He said the handling of the Tanden nomination “seems like amateur hour.”

On Wednesday, Iowa Sen. Chuck Grassley, who is in line to be chairman of the Senate Judiciary Committee in a GOP majority, also issued a warning to Biden as he prepares to name an attorney general. He told CNN that Biden should pick a nominee who will get “better treatment than what Sessions got,” referring to Trump’s first attorney general, Jeff Sessions, who was confirmed along party lines in 2017 after a bruising confirmation battle.

“It seems to me somebody that [it should be someone who has] got bipartisan support,” Grassley said of Biden’s forthcoming pick to run the Justice Department. “And that wasn’t the way Sessions was treated.”

Typically, on the first day of a new presidency, the Senate has confirmed some key Cabinet appointments. Trump saw his defense secretary and homeland security secretary confirmed on his first day, though that was fewer than his immediate predecessors.

New Jersey Sen. Bob Menendez , the top Democrat on the Senate Foreign Relations Committee, told CNN he has urged the committee’s GOP chairman, Jim Risch of Idaho, to have hearings in early January for the nominees under their panel’s jurisdiction: Tony Blinken to head the State Department and Linda Thomas-Greenfield as the US ambassador to the United Nations.

“I said to him, regardless of what happens in Georgia, we need to do this early,” Menendez said Wednesday evening. “He said, ‘I don’t disagree with you, and I agree with you that they’re national security positions.’ So I didn’t get a definitive, ‘Yes, we’re going to do it as soon as possible.’ But I have a feeling he’s well disposed at this point. We’ll see.”

Many Republicans have shown little resistance so far to some other key choices, including Janet Yellen to head the Treasury Department and Alejandro Mayorkas to run the Department of Homeland Security. And when asked about Avril Haines, Biden’s pick as director of national intelligence, acting Senate Intelligence Chairman Marco Rubio had little opinion about her choice.

“I don’t know much about it — so I haven’t had a chance to do any of the work on it,” Rubio said Wednesday of the Haines nomination. “We’ll wait for the paperwork to come in.”

Privately, Democrats are lobbying the Biden team to make some key choices. Rep. Jim Clyburn, the highest-ranking Black leader in Congress, is urging Biden to pick Rep. Marcia Fudge of Ohio to serve as agriculture secretary as he and others are looking to add more African-Americans to the Cabinet.

“She didn’t ask me to do it,” Tester said of his lobbying for Heitkamp. “But I think she’d be good.”

Some possible Biden nominees are already generating opposition from leading liberals in Congress.

“That’s a hard no,” Ocasio-Cortez told CNN of the possibility of Biden naming former Chicago Mayor Rahm Emanuel to run the Transportation Department. “I hope the administration would know better.”

Moreover, some currently in Congress are in the mix for key spots. Sen. Tom Udall, who is retiring at the end of the year, is in the running to head the Interior Department, along with Rep. Deb Haaland, a fellow Democrat from New Mexico.

“I got my name in for Interior,” Udall told CNN on Wednesday. “We need a good Westerner in there.”

Biden has signaled an unwillingness to pick a nominee from Congress, given the narrow margins in both the House and the Senate in the next two years. Asked about that reluctance, Warren — herself viewed at one point as a possible Cabinet choice — didn’t seem to object.

“The President-elect faces a lot of very difficult decisions,” Warren said Wednesday. “I understand that. What I care most about is that he is able to get the work done that the American people need.”

If Democrats sweep both Georgia seats during the January 5 runoff election, they’ll control the Senate majority under a 50-50 Senate, meaning they could afford to lose no Democrats if the GOP unites in opposition to a nominee. But if Republicans hold the majority, then Biden would need GOP support and hope that Republican chairmen would schedule votes and hearings on the key nominations.

Tanden, for one, could face a tough road to confirmation. Her nomination to run the White House’s Office of Management and Budget runs through two committees, including the Homeland Security and Governmental Affairs Committee, which Ohio Sen. Rob Portman is in line to chair under a GOP majority.

Portman told CNN he would hold a hearing for Tanden to be the next White House budget director, but he urged Biden to withdraw the pick.

“They should reconsider her nomination given her partisan background and her very liberal background for this particular job,” Portman said.

Asked why her choice was different given that the GOP-led Senate confirmed Mick Mulvaney — a former member of the conservative House Freedom Caucus — to the same job under Trump, Portman said: “It might not have been had there been Democratic control of the Senate.”

Portman’s panel has joint jurisdiction over the nomination with the Senate Budget Committee, which is expected to be chaired by South Carolina Sen. Lindsey Graham under a GOP majority. Graham has been non-committal about moving forward with a hearing on Tanden.

“Let’s see what happens with the Electoral College,” he said, referring to when electors meet in their state capitols on December 14 to make Biden the official winner.